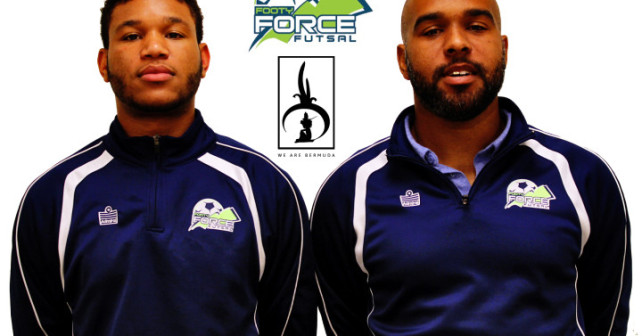 Can you give us a brief overview of your experience at the course and why you think Futsal will benefit Bermuda?

After two intense days of training which ranged from, tactics to set-pieces to even goal keeper training the Futsal national level 3 course was fulfilling as much as it was demanding. As being new to the Futsal world, I was eager to learn as much as I could so that I could return to the island and implement my new found knowledge. One of the biggest take away’s from the course was the correlation of how futsal can translate to the outdoor game of football. Futsal has the ability to improve player’s speed of thought, close control, offensive and defensive teamwork to name a few. After being immersed in this national level 3 coaching course I have no doubts that Futsal can be a great stepping stone for not only the Footy Force academy but for the youths are Bermuda.

The coaching course was condensed down into two days, we covered a lot of material which felt like it could have been taught over weeks. It was challenging, as we the coaches were given a lot of information to absorb. I think it is important to challenge yourself to constantly improve your methods and knowledge especially when teaching other people what you are ”supposed” to know. By completing this course, I feel I have grown as a coach which I will reflect on our training at Footy Force Academy. Futsal is a game that is very technical and tactics are always being developed, so it is important to keep up to date to keep progressing.

Futsal has grown immensely around the world and continues to grow at a rapid rate. The coaching course not only gave me the tools but also confirmed my belief that Futsal can be translated to the outdoor game of 11 aside football. If the youth are developed through Futsal programs our technical ability across the board would be better. Most of all the great football nations have adopted Futsal as a tool to develop youth players i.e Brasil where the game came from and Spain who had dominated World Football for a number of recent years. In Bermuda we would see improvement in the speed in which we play, the discipline of players, knowing their roles and supporting each other on the pitch in the offensive and defensive third.

Bermuda has an opportunity to be competitive in Futsal in the years to come, since the game requires less players and smaller areas to play in, it is a game that is greatly suited for our population.  We are a small nation and have very naturally gifted technical players which is a trait that all great Futsal players have which makes Futsal so entertaining to watch.