Aaron Burgess Impresses and is set to Join Huddersfield Town 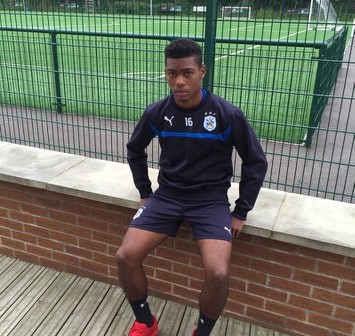 Nahki Wells is set to be joined at Huddersfield Town by another Bermudian.

It was at the trial that Burgess, who will be 17 in March, impressed Huddersfield’s coaches with his pace.

“This is a big opportunity for me, coming from a small country and going out there,” said Burgess, who scored for Hamilton Parish on Sunday in a losing cause against Boulevard.

“It would be very rare for a Bermudian to be in the same team as another Bermudian. I just hope to be like Nahki, playing well, scoring goals and making Bermuda proud.

“When I went in September he was giving me some good advice, talking about the club and that helped.

“I don’t know if he knows that I’m signing, maybe the club told him.”

Burgess will be the first player from Hamilton Parish to play professionally, and he knows he will be a role model for the club’s youngsters.

“That will be big for the community and hopefully I can open some doors for the other young players there so that they can follow me,” he said.

Burgess was a student at IMG Academy in Bradenton, Florida, at the time of his trial and had to receive international clearance before he could return to England.

The opportunity to show Huddersfield’s coaches what he can do came last summer following a four-day tryout run by Footy Promotions in conjunction with the UK Football trials company.

The Bermuda under-17 player was one of seven singled out for trial opportunities with professional and semi-professional teams in England.

“When he came back from IMG for the summer break I took six children from Hamilton Parish to an ‘ID’ Camp college showcase in Philadelphia,” said his father, Phillip Burgess, the coach of Hamilton Parish.

“When we came home Footy Promotions had the UK trials and he went up there and performed in the first two days, and then on the second day he pulled a hamstring, but they said they had seen enough of him, that they were very impressed with his ability.”

Burgess took his son back to school in early September and when he came home he received a phone call saying that Huddersfield wanted Aaron for a trial.

“I got back on the Monday and got the call on the Tuesday night saying that there was an opening for a trial at Huddersfield, that they were looking for a player that fit Aaron’s profile and can I get him out there,” Burgess said.

“I called the school, they gave him a week off and I took him over to England where he trained and impressed the Academy coaches.

“They loved his speed, he got clocked as the fourth fastest in the club from the seniors down.

“I dropped him off at training on the Monday and in the afternoon they called me and said: ‘Mr Burgess, you need to come by, we need to talk to you’. When I got there they took me in the office and said Aaron had really impressed the Academy coaches.

“He played a trial match on the Tuesday night against Sheffield Wednesday and scored a brilliant goal, but they lost 3-1.

“On the Thursday when he finished up they called me in the office and said, ‘we would love to have him, we’ll try our best to get him in the Academy’.”

Unfortunately for Burgess and Huddersfield they had missed the transfer window deadline, and as Burgess was playing in the US Academy league he required international clearance.

Such is Burgess’s potential that rather than offer him a two-year scholarship to the Huddersfield Academy, the club have offered the Bermuda player a professional contract, which will come into force when he turns 17 on March 9.

“He [Aaron Burgess] has been doing online courses that IMG has already set up for children who go pro,” Phillip Burgess said. “His last game for IMG was on December 18 when they played a college showcase and he took his team to the finals.”

Aaron will be accompanied to England by his father and mother, Angelique, who will help him get settled.

“She’s an educator and is a big part of his education,” Burgess said. “She made sure that the education part was most important and that’s what helped him to become an all-round student.”

We are very proud of and excited for Aaron Burgess for seizing this amazing opportunity which is the result of his hard work and determination. Footy Promotions fully supports him as he is set to begin life as a professional footballer at Huddersfield Town. Very Big Congratulations to Aaron and we wish him all the best!!

Footy Promotions in partnership with UK Football Trials provided the opportunity for players to show their skills in front of Top UK coaches, scout and agent. Aaron really impressed the whole staff and therefore, was one of the seven singled out for trial opportunities.