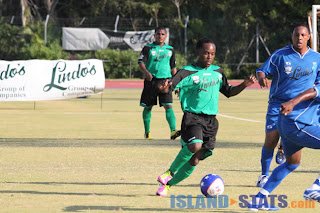 22 year old, Shayne Hollis is a Bermudian international footballer. He attends Cape Breton University and holds a midfield position on the Capers men’s soccer team.  While in Bermuda he plays for the Knights in the ISL soccer league and also, he is a player on Hamilton Parishes football team.  Shayne Hollis is a promising football (soccer) player, who shows great attitude on and off the field.  For more on Shayne, please see our Q & A section below:

FootyPromo: Who was the first team that you played for?
SH:Hamilton parish

FootyPromo: Is football the only sport you enjoy playing?
SH: Mainly yes, I used to play cricket when I was younger, but chose to stick to one sport.

FootyPromo: Do you have any football role models?
SH: Wooley Baxter, as a former player himself, he was always like a mentor to me, made sure I always put in my extras, and did what I had to to do perform

FootyPromo: What is the most memorable game that you have played in?
SH: In Cayman islands for the squad vs Puerto Rico. Losing 1-0 after 80 plus minutes, we had to win to place second and qualify for the next round. I scored the equalizer, and 2 mins later we scored the winner.. atmosphere and passion from the team was crazy.

FootyPromo: What are you studying in college?
SH: sports management/sociology

FootyPromo:  Are there any major differences in football at your college and football here in Bermuda?
SH:   I would say the biggest differences are fitness, discipline, and the game is much more physical. teams don’t stop running. its also very tough because we play games back to back, ex. game Saturday, game Sunday.

FootyPromo: What would you say to any player looking to play football in college?

SH: I would say to focus in school, and do your extras. its great to go away to college and play ball, and if you are good enough and your grades are up to par then you can be eligible for a scholarship, which is a big relief.